Elephant Polo: Is this the biggest thing in Thailand? 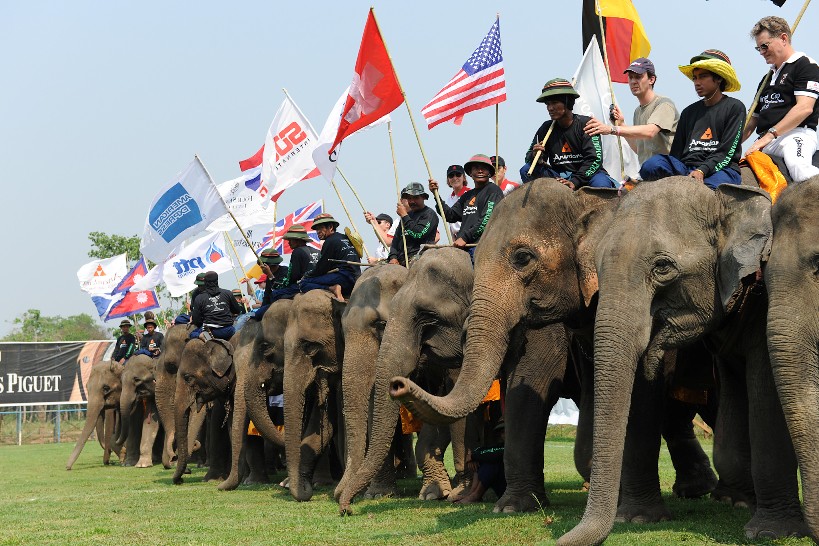 Editor notes: The sport of elephant polo attracted a lot of negative attention after inhumane practices were observed at the 2018 event. As such this article is provided for historical reference only and makes no endorsement or otherwise of the event.

A sport of massive proportions, this rampaging ball game is not to be taken lightly. Roderick Eime takes a wild swing at elephant polo.

Hanging on for dear life as my mount sprints down the field at full gallop, I prepare to swing my long lance-like weapon at the tiny object on the ground. I raise the shaft and with all my strength, unleash a mighty blow on the little rolling target. The heavy mallet head strikes the turf and messy tufts of grass go flying as if propelled by an exploding hand grenade. The ball, however, rolls pathetically toward its objective with barely a fraction more speed than before.

The royal and lavish sport of polo is, by reputation, reserved for kings and the wealthy elite, not some clumsy suburban ring-in. But I have an excuse. Sure, this is the first time I have ever played polo and the level of difficulty (or should I say ungainliness) is elevated somewhat from atop an elephant.

True, here in Thailand the King’s Cup Elephant Polo tournament is now a permanent fixture on the social calendar, attracting the well-heeled and the well-coiffed from the world of business, finance, leisure and luxury consumer brands. Instead of the rapid patter of frantic hooves and the panting of thoroughbred steeds, it’s the thud of massive pachyderms trampling their way up and down the pitch, occasionally trumpeting their enthusiasm or challenging an umpire’s decision via trunk call.

The commentator calls the event with all the enthusiasm and dry wit as if it’s a country cricket match, but despite the obvious comic element, the royal sport of elephant polo is a serious affair. The field is festooned with salubrious brands like Anantara Resorts, Audemars Piguet, Mercedes Benz, IBM, British Airways and American Express. Big money is at stake and the cast of celebrities can (and has) include New Zealand All Blacks, Miss Tiffany Thailand, Isabelle Fuhrman, former Thai PM Aphisit Vejjajiva, supermodels Cindy Bishop and Lukkade Methinee plus proper royalty like Prince Carl-Eugen Oettingen-Wallerstein and his wife Princess Anna and daughter Princess Joanna.

The money raised, however, does not line the pocket of some rich sheik, instead it goes to charity projects that help the elephants themselves including an elephant ambulance, the rescue of mistreated or neglected street elephants and even an elephant hospital in Krabi. Since the tournament was introduced to Thailand in 2001 by Anantara Hotels, Resorts & Spas, it has grown to become one of the biggest charitable events in Thailand that has raised almost US$500,000.

“We strive to make each new tournament bigger and better in terms of teams, fun and activities,” said Mr. Bill Heinecke, CEO Minor International and owner of Anantara. “But we must never forget the true meaning of holding the event and that is to make a considerable donation to the conservation and welfare of the Thailand elephant population.”

To the casual observer, there appear to be no rules. But there is even a World Elephant Polo Association, formed in 1982 and based in the Royal Chitwan Park in Nepal. From this lofty pillar, the august body oversees the sport which is played also played in Sri Lanka.

To throw some light on the method behind the monstrous mayhem of an elephant polo match, each team comprises just three animals played on a 100m pitch using a standard polo ball. The player sits on a saddle behind the mahout (elephant handler) who controls the animal according to player’s instruction. Each match is divided into two 7-minute “chukkas”, or halves, with an interval of 15 minutes. A goal is scored, clearly enough, when one team hits it between the goal posts.

Early games were attempted with a soccer ball, but the naughty elephants would get great fun from popping the leather ball, so that idea was changed. Foul play includes having your beast sit down in front of the goal mouth or pick up the ball with its trunk. You could even try bellowing your own commands at your mount, but unless you are fluent in elephant Thai, your most ardent instructions will go ignored.

Every tournament is attended by either a vet, an elephant behaviour specialist or both. Any animal that stops enjoying the game is allowed to go goof off and just muck about in the big enclosure out the back. Naturally, with any activity that involves the training of animals there are those who decry the sport as cruel and unnatural. Without seeing the training, I can attest that the animals do actually seem to enjoy the boisterous game. I visited a few of the resting elephants in their “green room” between matches and each seemed quite relaxed, standing quietly and gently enquiring of me if I had a banana or apple on my person with a quick examination of my pockets. A far cry from the pathetic animals I recall from my childhood, chained up behind the circus tent.

Tourism dollars flow into the host locations which have included resort cities like Chang Rai and Hua Hin. The 2013 event returns to Hua Hin from August 28 -September 1 and promises to be every bit the spectacle of previous years. Put on your best shirt, wear your fanciest watch, sip Blue Label and hobnob with the glitterati. Just mind out where you step!

Getting There: THAI flies 42 times a week from Australia to Bangkok.

For the latest special fares and promotions, contact travel agents or visit thaiairways.com.au.

Hua Hin is currently not served by scheduled airlines and can be best accessed by private road transfers or coach.

More on Thailand: www.thailand.net.au
Posted by rodeime at 14:08 No comments: