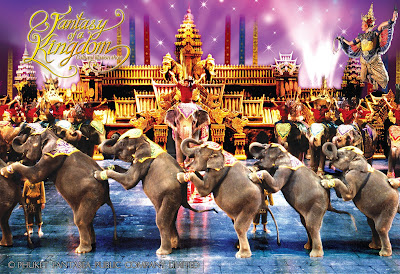 Balls. Cojones. Call them what you like. But the developer of Phuket FantaSea has elephant-sized ones ... you see, Phuket FantaSea is the work of an absolute visionary. Someone who said You know what this beach-and-bar island needs? It needs a 57 hectare cultural theme park with a 4000 seat restaurant and parking for 200 tour buses. Think Las Vegas by the Andaman Sea.

Yes, you could be forgiven for thinking he'd been out in the sun too long. This could've been the biggest white elephant ever. But who's laughing now? Ten years on, and the place is brimming nightly ...

I'm immediately put in mind of Disneyland, albeit an Asian interpretation of it, and the Lost City. Bright lights beckon. It is magical. It is romantic. It's fun. There are sideshows and souvenir stalls. Animatronics. Jungle adventures. Elephant rides. Tiger petting (doesn't sound right -- should that be patting?). It's an epileptics' nightmare with a million popping camera flash bulbs per minute.

The evening starts with an every-man-for-himself Thai buffet, which is an extravaganza in its own right, with the cavernous hall adorned by gargantuan kinnaree winged figures. I was expecting Food Aid style C-Rations but the food is surprisingly tasty for such a mass venue.

Then, unbuckling your belt a notch or two, it's show time. Now here comes the hard part. I'm in a conundrum: you see, you have to check your camera in at the door but how do I possibly do justice describing a theatrical illusion show -- that has attracted even the likes of David Copperfield over the years -- with words only??? Hmmm.

I scarcely knew where to look there was so much visual richness and texture and action going on. From bucolic traditional Thai village scenes to ancient kingdom capitals to -- hahaha, here come twenty chickens scuttling across the stage, and a dozen goats, and one, two, three, four water buffalo -- and, wow, where did those glow-in-the-dark trapezing acrobats appear from? Thunderous applause. Vivid silk costumes in rich reds, blues, pinks, purples, blues and greens. Fire eating. Dancing laser lights. Rain showers. And then the rousing finale with a dozen elephants daisy-chained trunk-to-tail. (I think: if the one at the back loses his footing, he'll rip the backsides out of the other eleven! Siegfried and Roy would have nothing compared to that.) Wow! WOW!!! Bravo!!! Amazing Thailand!

Then it's back to the reality as the crowd shuffles out, scarcely believing what they've seen. Oh great, it's only 11pm so now we can go and see the other cultural theme park on the island: Patong. And that's a fantasy of a completely different sort ...