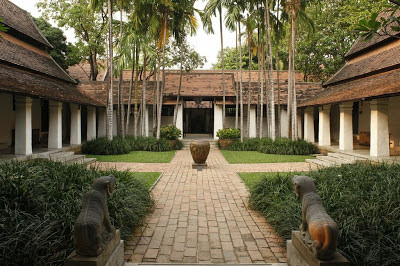 A great hotel is one which fires the imagination. Transports you beyond the everyday into some fantasy world of your own choosing.

It’s something I feel when I step into, say, The Raffles in Singapore and the E & O in Penang.
And it’s something I experienced recently down a rather non-descript soi (street) in the heart of the old walled city of ChiangMai. At Rachamankha.

Its imposing walls open up to reveal a splendid oasis that immediately allows you to dream you are on the verge of some great Mekong adventure. Like Henri Mahout slashing his way through the jungles to unveil an overgrown Angkor Wat.

But rather than untamed jungle, here you find frangipani trees, groves of palms and even bonsais. The shrill chirps of cicadas. And bird song. And thick-pillared buildings dazzle white in the highland sun.

“It’s so authentic,” said my wife. 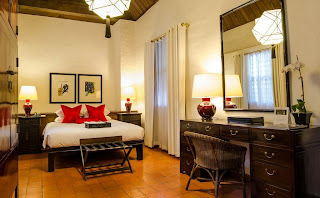 Indeed, Rachamankha has a sense of establishment and stature way beyond its mere 10 years. Perhaps that’s got a lot to do with use of heavy dark local woods. Or the 19th century Burmese antique manuscript boxes which line the corridors. And the beautiful old furniture pieces which adorn each of the 26 rooms and suites. No IKEA-like chipboard stuff here.

Local materials are also used in things like leather-bound menu covers and locally crafted lampshades. And 2-inch thick doors which add to the oeuvre of its Chiang Mai Old Town location.

One ‘but’, however. For a luxury hotel offering, not all rooms offer a bath tub. A shower just doesn’t cut it for me in such sumptuous surroundings. A strong personal bias of mine. I don’t care too much about the room as long as there is a bathtub to luxuriate in. With a bonus point for an old claw-footed enamel one. 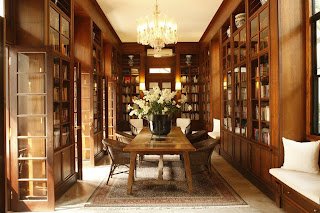 Guests will enjoy its airy library, which once again brings us to the likes of the Oriental Bangkok with its leveraged literary heritage. And for a truly regional gastronomic experience, the hotel’s gourmet restaurant dishes up exotic offerings from Thai, Myanmarese and Tai Yai (southern Chinese and Shan ) influences. A la carte breakfast served in the Chinese-themed courtyard sets the tone for a special day ahead.

At the end of a fascinating day around Chiang Mai, the hotel works its magic too. 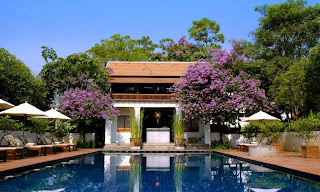 “It’s sooo romantic,” cooed my wife as we walked across the moodily spot-lit gardens to sit around the pool one night.

Little wonder then Rachamankha has garnered awards for architecture, culture and boutique accommodation from various respected sources including Conde Naste. For a wonderfully civilized adventure. Imagine that.