Brrrrr! I am frickin' freezing standing on the promenade deck of the Titanic, staring out at a clear starry night. A couple shuffle past me, headed to their plush first class cabin just inside the large heavy doorway. I should get out of this Arctic freezer cabinet myself ...

The experience at this exhibition is scarily realistic - too realistic! - given they have turned the air-conditioning to a ridiculously cold degree. I am sure most of will be on our deathbeds with pneumonia this time next week.

Still, our fate would be far better than the poor sods who set sail that April day exactly 100 years ago, which is why this show, officially called TITANIC; THE ARTIFACT EXHIBITION is now being staged.

Before you come aboard, you should know it is an expensive voyage at 500 baht per person. But really worth it if you want to soak yourself in the evocative and emotive side of the incident. Firstly, you are given a White Star Line boarding pass with a passenger's name on it and a few facts. So I am now Mr Benjamin Hart as I step aboard the grandest ship ever constructed (far too grand for me to afford 1st class which would cost today the equivalent of between $50-$100,000 for the trip.)

The size and scale of the exhibition is truly impressive ... not just a few rusty things on show, rather to-scale reproductions of entire 1st and 3rd class cabin sections, the massive wooden staircase, the boiler rooms, and of course the bow section where you can do that whole Jack and Mary (Leonardo diCaprio/ Kate Winslet) 'My Heart Will Go On' thing. That Titanic theme song video by the way has already had more than 82,000,000 hits on YouTube. Celine Dion has a looooot to answer for and some have even cruelly suggested it was a pity she didn't go down on the original ship.

It starts off with a detailed overview of the painstaking hot-rivet construction process, introduces you to the key crew (including the captain who was supposed to have retired but brought back for one last hurrah before sailing off into the sunset), and then into details of the journey itself.

Did you know that the Titanic burned 850 tons of coal per day, jing jing.

Menus are reprinted. Stacks of crockery, wallets, coins, jewellery all robotically retrieved from miles under the surface are on show. Ice warnings from other ships in the area rebroadcast and strangely ignored, as the Titanic sailed on at virtually full speed as other ships told of how they were stopped and surrounded by ice floes. (Or perhaps it's not that strange when the skipper is being feted with the finest champagnes on account of another successful crossing even though they were two days' sailing out of New York still).

You can even touch an iceberg. Yes it's real, and frozen, but they explain that the seawater that night was even colder because salt water freezes at a lower point. Bet you didn't know that! So most people drowned not from, er, drowning, but from hypothermia.

The cruel fate of several passengers is spelled out. I, Mr Hart, for example was a talented builder travelling with my wife, Esther, and seven year old daughter, Eve. I had packed up my family and was heading for Canada to get a job in the booming town of Manitoba to get out of the financially-strapped problems I had found myself in back in Essex, England.

Poor Esther had misgivings about this ship and stayed up each night concerned for us, then slept through the day.

Feel for Frederick Goodwin though, who was on board with his family including six kids. They were booked on another liner, but their booking was changed over to put them on the Titanic instead. None of them survived.

Apart from sadness and melancholy, I emerge into the 34-degree celsius Bangkok afternoon feeling a little angry. Angry at the ineptitude of things. How, for instance, when the ship had taken 3 years to build, had the two lookouts been too busy to remember to pack simple equipment such as binoculars. Pretty simply thing, really.

And although the original plan had allowed for 32 lifeboats, this had been whittled down to just 20 for better aesthetics on the deck. Even this number was above the legal requirement but still woefully short as there was really only provision for about half of all the passengers anyway. This was not helped by the fact that the first 7 boats launched virtually empty carrying only 160 passengers out of a possible capacity of 430. And the menfolk stood around the decks desperately puffing away on their cigars while the orchestra played 'Nearer My God to Thee' (the final request of the conductor himself who'd always wanted that song to be played at his funeral). 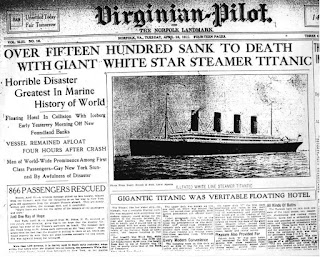 As for me, Benjamin Hart? I never lived to tell this tale.


The Titanic 100th Anniversary Exhibition 1912-2012 is on at CentralWorld Live, CentralWorld, 8th Floor, Bangkok (get off at Siam or Chitlom BTS stations) from 10am-10pm daily until September 02, 2012. Tickets at the door or from Thai Ticket Major.

All stand (still) for The Royal Anthem Thailand


The Royal Family is venerated in Amazing Thailand, and rightly so, the King and Queen are not only the longest reigning monarchs in the world, jing jing, but they have done untold great things for this country and its people. Just last month he celebrated 66 years on the throne, a world record.

In just about every office you will see pictures of the King and Queen in the lobby, even giant posters several stories tall outside office buildings in Bangkok.

Travellers should also be aware that the Royal Anthem is played often at 8am and 6pm daily. You will notice that Thais will stop dead in their tracks and listen quietly and attentively while it plays for a couple of minutes. You are expected to do the same (just yesterday, it was quite funny to watch those tourists who were not in the loop wandering about and wondering why suddenly everyone has frozen stiff in the spot where they were).

If you go to a movie in Thailand - and the cinemas in Bangkok, Samui, Phuket, Pattaya, etc are excellent and cheap and play new release* movies that are on the same time schedule as the rest of the world - they will also play the anthem before the movie starts.

You should stand and listen quietly. I have seen farangs not do this, and it is openly disrespectful to local customs and to the locals who have genuine adoration for the Royals.

So if you're sitting, get off your fat ass and stand up. If you're walking, just stop where you are. And enjoy the fact that at least one country has a stately figure head who is actually worth respecting.


* Spiderman, Abraham Lincoln and The Dictator are currently showing in Bangkok cinemas and around the country.
Posted by Stu Lloyd / worldsmith360* at 11:33 1 comment: