Sometimes I wonder whether kids have more fun than grown ups.

I mean it just seems you drift from one fun activity to another, pick your nose unselfconsciously, eat when you're hungry, drink sugary soda pops when you're thirsty, laugh at naughty toilet jokes, nap when you're tired, then get up and play all over again. No mortgages. No boss. No woman, no cry. Easy life! 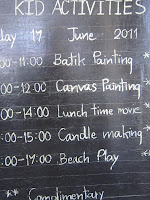 Some of that childhood spirit was rekindled in me at the Dugong Kids Club at Anantara Si Kao Resort and Spa recently.

You see, my companion had been excited by the little blackboard which had promised batik painting and other free activities that day. Ok, but first we had to grab some nourishment for my growing brain at the hotel's Leelawadee Cafe. As much as I love Thai food, just now and again, pizza is the only way to go, so we ordered their seafood pizza. Oh man, that was sooooooooooo good ... one of the best pizzas I've had anywhere, anytime. Light crispy crust, cheese that was was all stretchy and stringy ...

So then I drifted along with her, and found myself in a wonderful airy space full of colour and promise. I was given the option of candle making. Ok, cool.

This involved tipping fine powdery neon-coloured granules in a pattern into a little glass vase-like container to make the base for my candle. The attendant Miss Pu (haha, her name sounds like Poo ... haha) gave me a demonstration. I can do that ... I'm a big boy now. 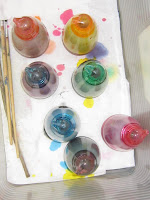 So, with tongue sticking ever so slightly out of the corner of my mouth, I started tipping the powder gently into the vase. Sunshine yellow, hot pink, swimming pool blue, radioactive green, they all went in, carefully constructing a wavy pattern echoing the Andaman Sea, sand and waves, visible just outside the windows.

My companion meanwhile was absorbed in painting her floral batik patterns, sneaking glances at my progress occasionally with encouraging expressions.

I carried on carefully compiling my pattern. I was determined that this was going to be the best candle ever. It's not that I'm competitive though ... no, really.


Finally I was happy with my candle base. The assistant gave me what I was sure was a look of utter amazement at my creative talents. She'd never witnessed such skill and craftsmanship in her Dugong Kids Club. I mean, I looked at some of the other stuff drying around the room. I mean some of the other kids had gone over the lines and everything. Some parents had been so disappointed in their kids' stuff they didn't even bother to take them home, so there. 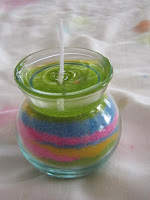 'Is this the best candle you ever saw?' I asked. I took Miss Pu's giggling and silence to mean Absolutely Yes. You see, sometimes you have to understand these cross-cultural nuances. It's often the unsaid things that are more weighty.

Next we poured in some gooey silicon stuff to seal in the contents. Then we stuck in a candle wick, making sure it was perfectly straight and upright. After all, this was not just any candle, this was The Candle of the Year. She giggled and turned away again. My companion rolled her eyes. In encouragement, I'm sure of it. 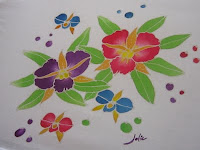 Soon, her batik was finished ... an awesome T-shirt which she'd get to keep as a souvenir, and my candle -- a post-modern pop art masterpiece -- was drying.

Just then, the hotel's general manager strolled in. He shot a withering look at my creation. 'Hah, even my two year old can do better than that!' he exclaimed. He was just jealous I can tell.

It's not easy being a kid, jing jing.