Chiang Rai - the 1148: the best motorcycle road in the world? 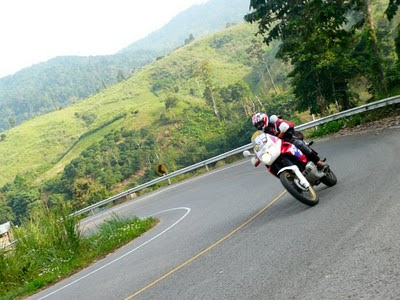 Chiang Kham has not much to commend it, other than an amazing wooden temple. Some would say that's enough. But the ride down this extreme eastern flank of Chiang Rai province was a joy - corn fields, dramatic limestone upthrusts, valleys which fell away beneath us (sometimes literally, as the road shoulder had collapsed), and mile after mile of winding snaking roads.

We stayed in the small town's seemingly only hotel, a very low budget and drab affair, but woke up refreshed and ready to hit the road. Because today we were heading on to the much fabled 1148 ...

I suggest an early start because that way you enjoy the luminescent paddy fields in soft morning light, and enjoy a crisp windchill factor before the sun god kicks in. The 1148 starts soon out of Chiang Kham, flatly and smoothly enough. And then, AND THEN ...

Suddenly you're swooping and diving and sweeping and twisting and turning and doubling back. The 1148 has more S-bends in it than a plumber's showroom, jing jing!

So good in fact that I didn't bother to stop for a photo because I just wanted to keep going and going and going (hold on, isn't that the Duracell bunny?) so due photo credit above to GT-Rider.com, the best motorcycling site for Northern Thailand and Indochina.

And the 1148 does keep going up and up and up, then down and down and down. It finally flattens out at about the same time when your body says 'Enough, enough, I can't produce any more adrenaline!'. Then you're onto an arrow-straight wide section of a few kilometres which brings you to the junction of the road to Nan.

This, dear readers, is another section where you might just want to check that your throttle is working OK in the 'fully open' position. Just in case, you understand!

Phil and collapsed onto a bench in a coffee shop in Nan, drenched in sweat. Exhausted. Beaming wild eyed.

Phil, a veteran of several hundreds of thousands of motorcycle touring kilometres around the world, was shaking his head, speechless. (That was a nice change.)

Finally he fixed me in the eye and said: 'That is like the Old Pacific Highway in Sydney times a thousand!'

[Footnote: if you want to reach the 1148 from Chiang Mai, take the road to Phayao then across to Chiang Kham. It's a half day ride.]