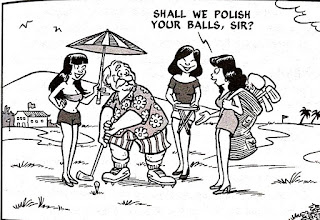 Let me start with full disclosure. The author and editor of the Hardship Posting series is someone I know really well. Have done for years. In fact, all of my life. We grew up together, went to school together, and are practically inseparable as adults.

I am blogging about this series of books now because they are just being released for the first time ever in an e-book format on Amazon. Click here to see inside the book online [insert subliminal ad message here -- Buy it! Buy it! buy it!]

Some have said it's the best Thailand travel guide because it deals with Bangkok bars, notorious Thai nightlife, airport and immigration stories and so on. But it's not really a travel guide to Thailand like the Lonely Planet. Nor is it a novel set in Thailand. Instead, it is a collection of 400 amazing and amusing stories collected from expats in Asia, covering the full spectrum of life. It just happens that most of the craziest episodes seem to happen in the Kingdom, for whatever reason (such as the British gent who posed as the High Commissioner to impress Bangkok bar girls). 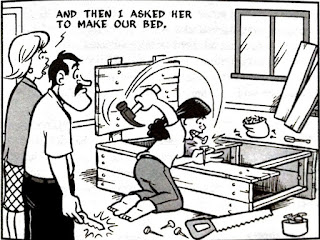 I could go on and on raving about it ... it makes me feel a little awkward to do so. Honestly. Rather, listen to what various readers and reviewers have got to say about the best-selling series of 3 volumes which has already topped 70,000 sales. 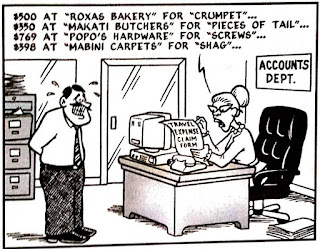 And, finally, one more from The Expat Magazine Singapore, who said:

"A mighty collection of tales. The bawdy humour comes thick and fast throughout. A rib-tickling read for the not-so-faint hearted."

Those last two words are important. Don't even open the cover if you are the least bit thin-skinned. You WILL be offended. No wonder it's banned in China, and unwelcome in polite society just about everywhere else.

So luckily you can buy it and download it from the privacy of your own computer now.


[The cartoons in Hardship Posting Vol 1 above, are by Larry Feign, the whizz behind the long-running World of Lily Wong strip.]

If you like the 'Washing your balls' cartoon, I have plenty of Thailand golf course stories and reviews on this blog. Such as this one from Phuket.